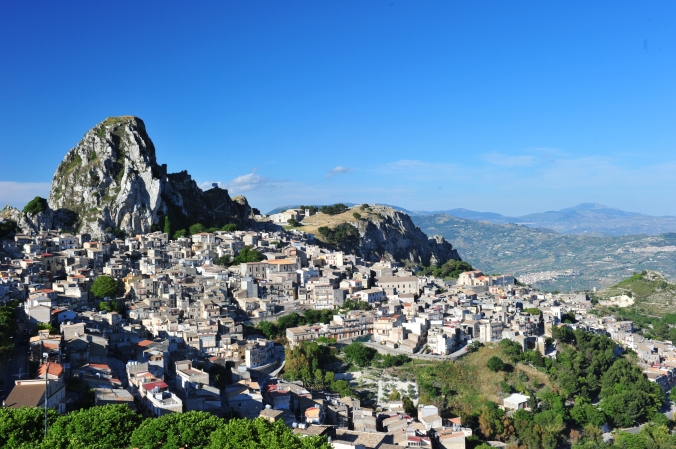 Today we left the seaside city of Sciacca heading for the pleasant mountain community of Caltabellotta. The keyword in that previous statement is mountain. I am on a bike. So, before you read much further you could pretty much guess what my day was like. I started the day looking up at the mountain seeing all these lovely windmills way off in the distance, high up on the slope. By lunchtime, I was looking down at those same windmills.

Caltabellotta is a quiet community on Mount Kratas, resting between the summits of Monte Castello, Monte Pellegrino, and the cliff of Gogala. Often when discussing a strategy for achieving a goal at the office, a colleague will ask; is the view worth the climb? In the case of Caltabellotta, it was. There are a number of things to see in the village, such as the Caltabellotta Cathedral and the remains of an Arab castle, but it was the view that made it worth the climb. You can see the dramatic outcroppings and rolling hills that give way to the sea below. 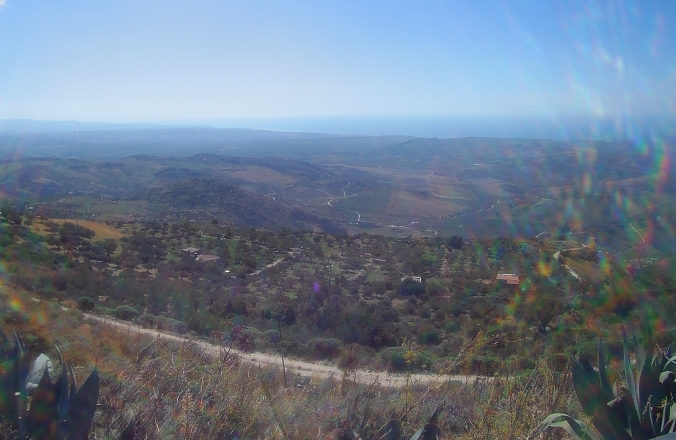 When cycling, there are times when I will simply stop to appreciate where I am. In that quiet moment on the slope of Mount Kratas, the September sun shining down on my face, I was overwhelmed with a sense of gratitude that brought me close to tears. I felt blessed to have the health and resources that enabled me to have this experience. I felt blessed by the day, by that place. I felt blessed that in a world that can be so full of noise, so marred by ugliness, so enflamed by confrontation, I should be so privileged by this quiet, this beauty, this peace. Frequently, in these moments I attempt to take pictures. Unfortunately I was never able to capture through the camera lens the beauty I was experiencing. It was a consistent frustration throughout this trip. 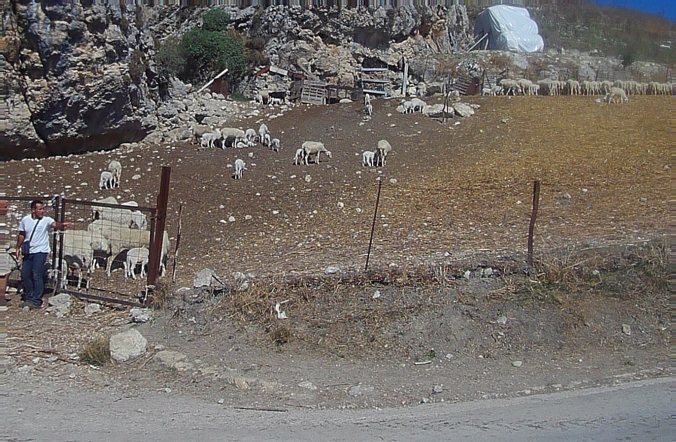 As I ground my way up to the town I passed pastures and orchards. I love animals. I imagine their innocence to be what humanity must have been like before Adam’s fall. It was, therefore, a real pleasure to pass the livestock grazing in the fields. In addition to several cows who did not seem to understand my Italian, there were several flocks of sheep. At one point I met a shepherd and his dog that was corralling his flock. Now, that was something I don’t see every day. Prior to that, I don’t think I had ever seen a flock of sheep up close. What can I say, I am a city boy. The little lambs that leaped and hopped about could not have been cuter. I could have lingered, but lunch was waiting for me at the top of the mountain. 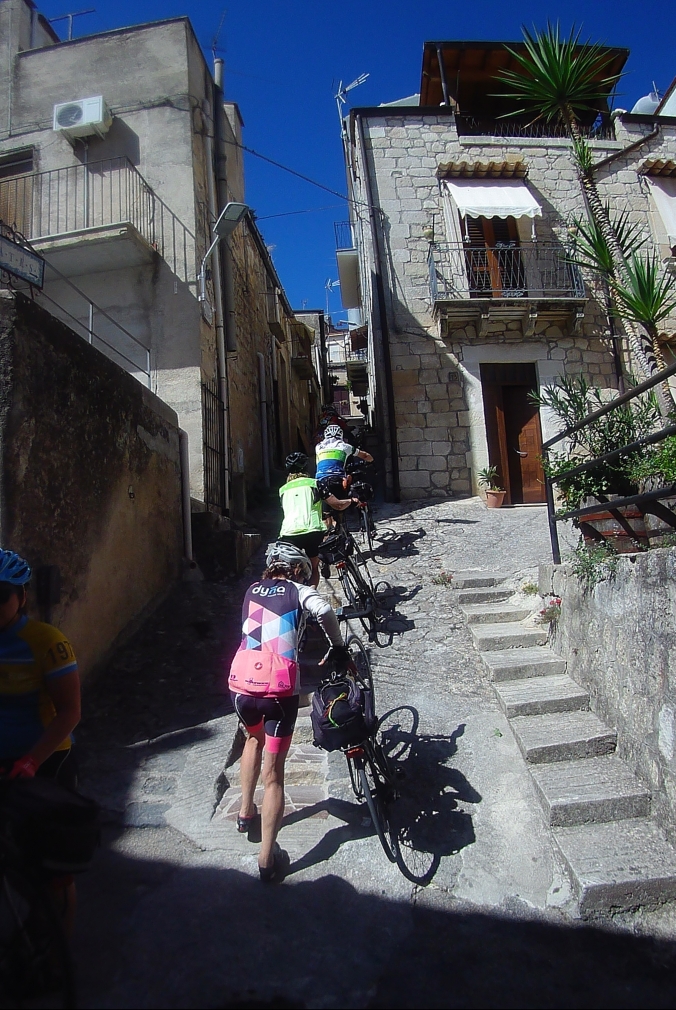 When I reached the town of Caltabellotta a suspicion I had developed of Sicily was confirmed. Nothing is at the foot of a hill. Nothing. To get to anything you have to go up a hill, even when you are going back to where you came from. It is uphill both ways. To get to lunch we had to not only climb up a steep hill over winding cobblestone alleyways, but we had to do so wearing bicycle shoes. Again, the view was worth the climb, or in the case the lunch was worth the climb.

I am convinced that the best food in any city is in the little hole-in-the-wall mom & pop places. While the big corporate chains that populate most American cities may deliver consistency – if you have eaten in one Olive Garden, you have eaten in them all – it is in those little family-run places tucked away in the corners of small towns where you find the really good stuff. There you find traditional dishes made the way the family made it for Sunday dinner, and we all know how Italians feel about Sunday dinner. You know you are in a good place when the cannoli are not identical, they look like they were made that morning by nonna. That is what this place was like, a small family-run shop with food that was unique to them. Again, it is finding these little hidden gems that make experiencing a country by bicycle worth the additional effort.

After lunch, we headed down the mountain to Menfi. When cycling you come to realize that like life in general, every uphill has a downhill that goes with it – understand what I said above was hyperbole. The steeper the climb the greater the exhilaration you receive during the descent. We came down that mountain at speeds which were frightening at times, making it all the more fun. The momentum just about carried us all the way to Menfi, our destination for that day – well that too might be a bit of hyperbole.

As much as I love cycling, there are parts that I really dislike. I am not fond of riding along busy roads, I don’t think anyone is despite the need to do so at times. I also dislike bridges, I always feel I am going to tumble over the side. But, the thing I really … really … really hate is the wind. I mean I really hate it. So, when at one point during our ride that day we were forced to ride alongside a busy road, over a bridge, with a strong crosswind, I was far from happy. That brief part was not fun. Not fun at all.

I want to make sure that I don’t overdramatize the bridge bit, on every bike ride there is going to be a part that isn’t fun. It kind of goes with the territory. Once we passed over that bridge, turning off the main road, we found ourselves on this perfect little bike path that wound its way through miles of vineyards. I know that I have mentioned this frequently, riding through vineyards or orchards, but there are few things that could be more pleasant than this experience. It is one of the reasons I am such a slow cyclist, I don’t need to rush through to the other side. I just wanted to be in the moment, despite the strong crosswind. 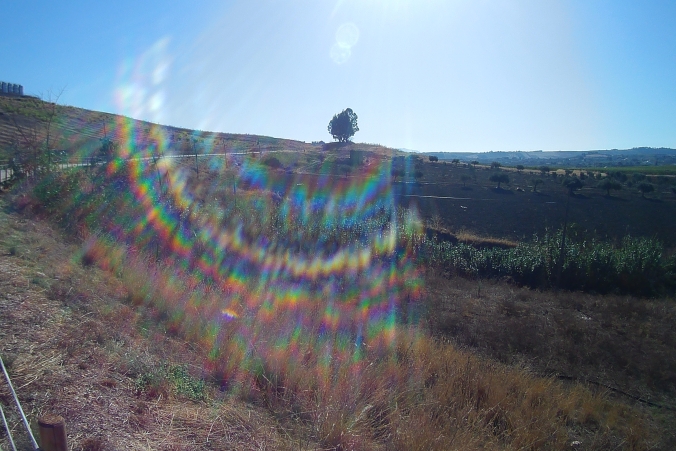 The climb was worth the view. That is today’s theme. The view was worth the climb to Caltabellotta. Lunch was worth winding our way through the cobblestone streets in bike shoes. The beauty of the orchards of Menfi was worth riding over a bridge in the wind. However, most of all, seeing Sicily up close, seeing the small towns of my ancestors, visiting with people who are not constantly barraged by tourists, was well worth the extra effort seeing Sicily by bike, especially when compared to the experience of those big bus tours.

For more on Italy read my book Italianità: The Essence of Being Italian and Italian-American.