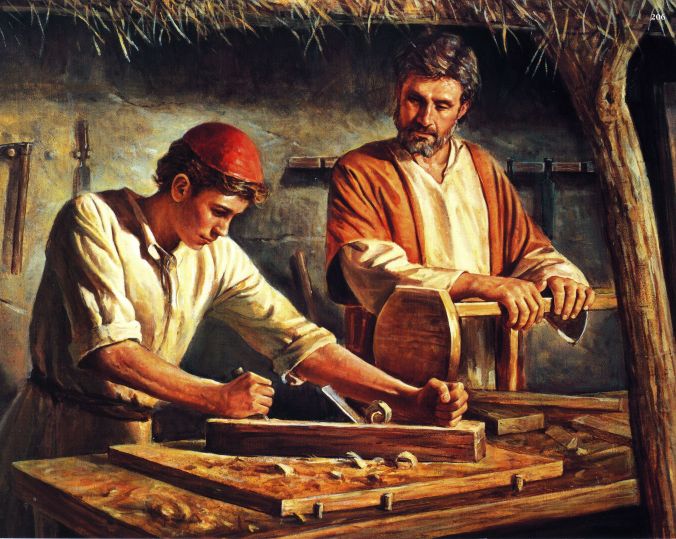 I have always felt bad for Saint Joseph. While fathers, in general, seem to be second to mothers in the hearts of their children, poor Joseph had an enormous challenge. How do you compete with the MOTHER OF GOD? The Madonna!! Since the scripture does not say much about him after the birth of Jesus, in the minds of many, he is a secondary Gospel character. However, I believe most people underestimate not only the faith of this man but his kindness. Think for a moment not in modern terms, but according to the morality of Israel at the time. A lesser man would have easily dismissed Mary as someone who got caught messing around, making a public spectacle of her, but Joseph was a man with a good heart. He initially intended to break off the betrothal quietly so as not humiliate her. This speaks to me of his kindness. After the angel appeared to him, he accepted – on faith – his role in God’s plan. People forget God chose Joseph as Christ’s father, just as he chose Mary to be his mother. In my opinion, he is a man who is equal to Mary.

In a sense, the day is Italian Father’s Day, a day in which we honor all our fathers, but it is so much more. While in the United States we gift fathers with ties and coffee mugs emblazoned with World’s Greatest Dad, Italian Father’s Day has a more holistic feel to it, incorporating the entire family. In Italy, celebration altars are set up in remembrance of the Holy Family with Saint Joseph in the place of honor. In some towns, the community selects three members to represent the Holy Family. They are seated at a table of food specially prepared for the day. After a priest blesses the food, the celebration begins and everyone is welcome to eat as much as they like.

The food on the table carries a special significance. Loaves of bread are baked into different shapes such as carpenter’s tools, a staff, and a cross as well as various animals and sea creatures celebrating the abundance of the earth. You will not find any meat or dairy on Saint Joseph’s day. For example, rather than sprinkling their food with cheese, breadcrumbs are used to symbolize sawdust.

Personally, I associate La Festa di San Giuseppe with food. My mother would make her special Saint Joseph’s Day spaghetti to celebrate the holyday. In keeping with the sharing spirit of the day, she would send me around the neighborhood with pots of the stuff for various friends. She wanted to ensure the older Sicilians who might not be able to observe the day were able to enjoy at least some part of the tradition.

While throughout Italy the day is important, it is especially significant to Sicilians for whom Saint Joseph is a patron saint. In the 12th Century, a drought had struck the island causing a famine. The Sicilians prayed to Saint Joseph to save them, promising to always honor his name. When the rains finally came the people made good on their promise. To this day, wherever Sicilians have settled, you will find La Festa di San Giuseppe celebrations.

One of these celebrations that is especially interesting takes place in New Orleans. When the plantation owners brought Sicilians to New Orleans, they worked shoulder to shoulder with African-Americans, many of whom were former slaves or the children of slaves. The Sicilians shared with them all the traditions of parades and festivals honoring various Italian saints, especially Saint Joseph. What makes the New Orleans celebrations special is the contribution of the Mardi Gras Indians, who are not Native-Americans, but African-Americans dressed in costumes based on Native-American dress. There are only two times a year when you can see the Mardi Gras Indians on parade; Mardi Gras and La Festa di San Giuseppe.

So this March 19th, don’t forget to wear something red and give your dad a call to wish him happy father’s day. While you are at it, maybe say a little prayer to Saint Joseph, even if you are not Catholic. Hey, it couldn’t hurt to be on friendly terms with the father of Christ. Right?

To learn more about La Festa di San Giuseppe and Italian culture, read my book Italianità: The Essence of Being Italian and Italian-American